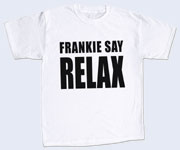 Drew B has linked to me in a blogtastic game of tick called four things. In this people who have been linked to name a number of different items in groups of four and then link to four other blogs that they know of that could continue this one.In typical Wired reader style, this concept of an idea that can be communicated is called a meme (and memes are often written about in digerati circles).

Classic memes that non-geeks would have heard of include the Frankie Says series of t-shirts and No, but Yeah, but No dialogue from Little Britain.

Three or six are the perfect numbers according to a discussion between Lee van Cleef and Clint Eastwood in The Good, The Bad and The Ugly. Wikipedia couldn’t shed any light on it either.

PR operative – at present
Foreman – heading up a shift team on the bitumen plant in the UK’s second smallest oil refinery
DJ – up north, before the young people started getting back into guitars, freebase cocaine and heroin
On the line – in a meat packing plant

Four movies I can watch over and over

All the Presidents Men

The Dollars Trilogy (particularly For a Few Dollars More)

I don’t have a television but I do have a soft spot for vintage shows, here’s four that came to mind:

It would actually be a hell of a lot more than this but: Slate.com, Wired.com, RTE.ie and ThinkSecret.com

Four places I’d rather be

Liverpool, with my mates, record shopping, sat in front of a range enjoying a turf fire