I have gone through a number of journeys to get online. This year I will have been connected to the internet for 20 years. I actually had email even longer. Back in 1994, I was working on a temporary contact at a company called Optical Fibres – a collaboration between Corning and UK cable maker BICC. Even back then there was price pressure on optical fibre as globalisation kicked in, less than a decade later where I worked is now a greenfield site, half of which is included in the space for expansion of a Toyota engine factory.

I had an email address that was a number. 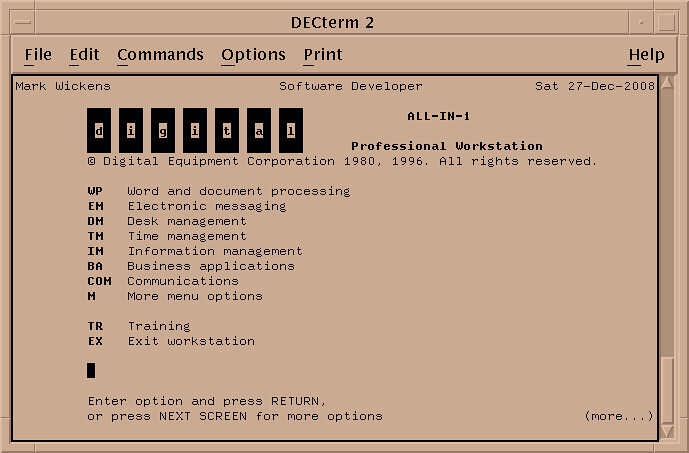 It was attached to a DEC VAX ALL-IN-1 productivity suite account. I was able in theory to email anyone who worked at Corning sites around the world. But email was my only form of being able to get online..

While ALL-IN-1 was able to support external (pre-internet) email networks like CompuServe, I only dealt with people internally. It was a step up from having to check the pinboards in communal areas and the sporadic internal mailroom deliveries.

Having managed to get online, I sent my first spam email, when I tried to offload some Marks and Spencers vouchers that I had been given on to my colleagues, but that’s a story for another time.

In September that year I went back to school, this time to university. Computer labs had changed a bit in five years or so since I left secondary education. The computers were on an ethernet local area network, this local network was connected to the nascent internet.

I had an email address with a ‘@hud.ac.uk’ domain, but my name was still a number. My teachers didn’t use email as part of their teaching process then and you couldn’t submit your work via email. Email was a POP3 format. Given that it saved emails on the machine I spent an inordinate amount of time getting my own computer up for running on the college facilities against the rules.

It involved a mix of software and hardware kludges, since I had to make use of the AppleTalk port on the laptop to somehow connect to the ethernet network at college.

Internet access at college was quite liberating. I was able to do online research and cite online articles. I kept in touch with a couple of friends at college and university from home who also had email at the time: for free.

I got a Yahoo! email address during my last year of college so that I had something which would last me beyond graduation.

My year after graduation was largely lacking in connectivity. I hunted around for an cyber cafe which were starting to crop up around the place. I eventually found one around the corner from James Street station which I used to go to with my friend Andy on a Saturday. I would bring a floppy disk with my CV on to reply to a series of job ads from The Guardian, PR Week and Campaign. I showed Andy how to use Netscape during this time.

The cafe atmosphere and dedication to good coffee was reminiscent of independent cafes today in London, I remember seeing a couple of multimedia art exhibits there occasionally – this was back when Flash was bleeding edge and promised a whole new world of visual stimulation.

A move to London meant around the clock access to the net through work. I lived in a house of five Serbs and no phone line and smartphones were HP personal organisers that allowed you to clip a Nokia 2110 on the back or an infra red connection between an Ericsson SH-888 phone and a laptop or early PalmPilot device.

I built up a collection of early house music sets encoded in Real Media files from an FTP site in Chicago hosted by the people who ran what become Deephousepage. At the time they used a faculty account at the University of Wisconsin-Madison, which would have provided high quality free hosting.

A lot of this material was legendary to me, only a small amount of it made it on cassettes as far as Liverpool in the late 1980s. 1980s Chicago was as distant to me as the Northern Soul scene in Wigan some 20 years previously.  My FTP client would run at work during the weekend, I would bring in a CD-R and get it burnt down during the week. I also did the same for the latest software that I used on my Mac.

After 18 months of shared housing, I bought my own place to the north of London in the Home Counties, nothing fancy, but it was my own space and I could finally have a phone line. At this time, Freeserve was offering fixed price connectivity dialling into a free phone 0800 number. And I had my first email account at home.

I moved job, wasn’t that keen on it and started to think about what was next and getting ready to potentially go freelancing. 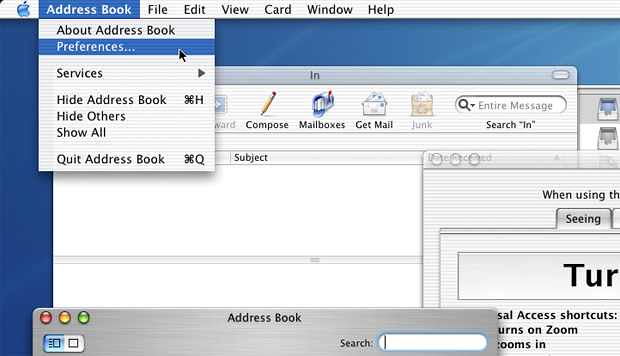 The economy went into dot.com freefall and I finally upgraded my computer to a second generation iBook. I then upgraded that machine to OS X and the new operating system highlighted to me the need to go and start using internet broadband. Freeserve was my first choice of DSL provider, simply because it was easy to upgrade from my dial up connection.

The internet suddenly started to become much more useful. Yahoo! Messenger and email kept me connected to my London-based friends when I walked out of the agency role I had into the world of freelancing.

Around this time, I got my first smartphone, a Nokia 6600. I had tried using my Nokia 6310i phone as a wireless modem for my Palm PDA but it was a painful process. What moved things forward was the IMAP email account I got as part of Apple iTools. IMAP allows email to be synched across different devices.

This was all still done over GPRS and later EDGE. 3G services were limited, crippled and the network reception was awful – truth be told it still is in many places. Truth be known things have improved incrementally.

I went through a succession of Palm Treo and Nokia Symbian smartphones until finally moving to the iPhone. The killer application was an address book that just worked rather than corrupting my data or bricking the handset.

Whilst the first five years I saw big changes in my wired netizen status, over the past five years my connectivity has changed little if at all. The key change being an iPad at home as an additional mode of access. I still use DSL, mobile internet which is patchy and upgraded equipment around the same essential paradigms. More online related content here.