First of all, what’s ‘design thinking’?

It’s a term that has been popularised by IDEO to encapsulate user-centred thinking. Wikipedia does a good explanation of how it differs from the scientific method

Design thinking differs from the “Scientific method”, which begins by stating a hypothesis and then, via a feedback mechanism, continues iteratively to form a model or theory, by including consideration of the emotional content of the situation. While feedback in the scientific method is mostly obtained by collecting observational evidence with respect to observable/measurable facts, design thinking feedback also considers the consumer’s emotional state regarding the problem, as well as their stated and latent needs, in discovering and developing solutions. In scientific methods with a heavy emphasis on math or physics, emotional elements are typically ignored. Design thinking identifies and investigates both known and ambiguous aspects of the current situation in an effort to discover parameters and alternative solution sets which may lead to one or more satisfactory goals. Because design thinking is iterative, intermediate “solutions” are potential starting points of alternative paths, allowing for redefinition of the initial problem, in a process of co-evolution of problem and solution

So design thinking builds on the scientific method to also include human factor consideration (beyond physical ergonomic considerations of industrial designers).

The attraction for businesses is that it allows a wider range of intellectual tools to be thrown at a problem. Business problem solving traditionally has borrowed from the scientific method: data is used to form a hypothesis, which is then tested. The lack of consideration of human factors becomes a problem as an organisation tries to become marketing or customer-orientated.  In digital organisations the iterative nature of design thinking mirrors modern approaches to development on software and digital services. Short bursts of iterative work that are then refined regularly. Digital products and services don’t necessarily need to be built by the organisation; banks don’t need to build their bank statement system, restaurants their digital menus or phone companies their billing design interface.

The blind spot that I see in the process is when we forget that the promises made through a proposition built via design thinking has to be delivered in the real world.

Here’s a case in point.

By the 1970s Japanese quartz watch movements with miniaturised watch batteries  had proved an existential threat to the Swiss watch industry. The Swiss had embraced quartz technology alongside their tradition offerings as far back as 1969. 20 Swiss manufacturers came up with the beta21 movement which they released soon after Seiko’s Auctron. Overall the industry was slow to go into large commercial production of quartz watches. 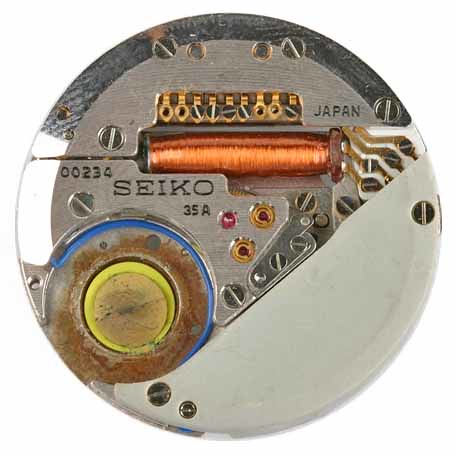 By 1974, the price of gold shot up fourfold and the dollar dropped by 40%. These two factors hit the premium market hard. From the end of the war until the rise of China, America was the largest single market for luxury goods, though the Japanese gave them a good run for it. Luxury watchmakers were hit by both rising costs and dollar price inflation in their largest market. Low-end and premium brands disappeared left, right and centre.  In 1978, the number of quartz watches manufactured passed that of mechanical watches as part of what the watchmaking industry still calls the ‘quartz crisis’.

IWC ended up being bought by VDO. At the time VDO was an independent German company that specialised in making speedometers and gauges for both cars and the marine sector. It still makes electronics and instrumentation, but is now owned by Continental (of Continental tyres fame). It was the VDO connection which connected IWC with Porsche Design.

Porsche Design had a reputation for making watches that had a focus on user experience. They adopted a focus on minimal design, legibility and innovative materials.  Their first design was a chronograph which had an innovative  first black steel watch, they used PVD (physical vapour deposition) to provide a stronger surface than paint. They made an innovative model with a compass hide underneath its watch, the watch lifted up

The next watch would be a dive watch, it was partly aimed at a German Navy requirement for dive watches that had a sufficiently low magnetic signature that combat divers could safely work with naval mines.  IWC had invested in machines for working with titanium. Dive watches that perform are usually pretty chunky products. 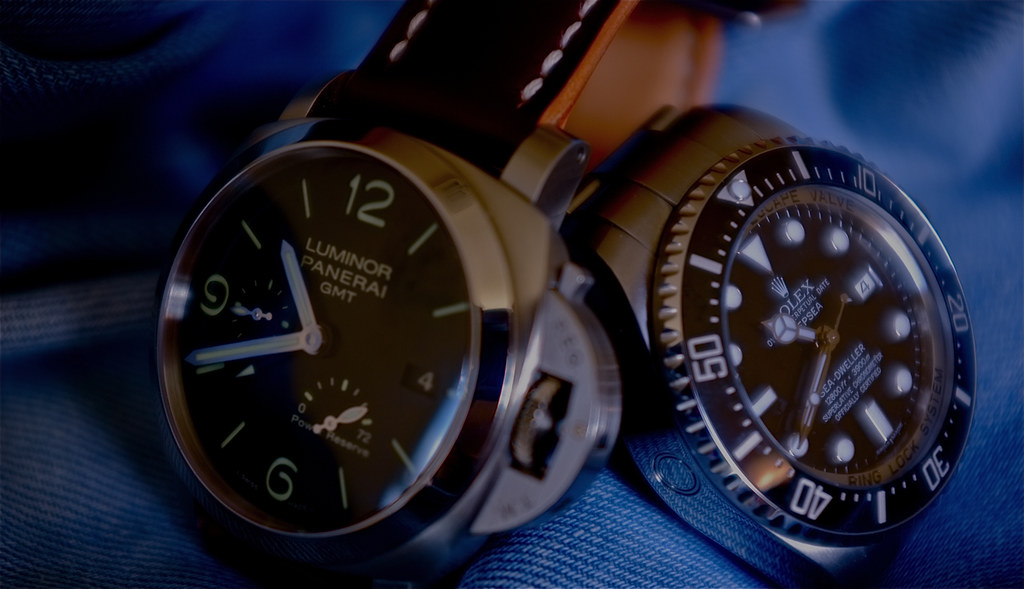 These two designs by Panerai and Rolex respectively are good examples of the typical design approach. Enough metal is used to keep the immense pressures under control. 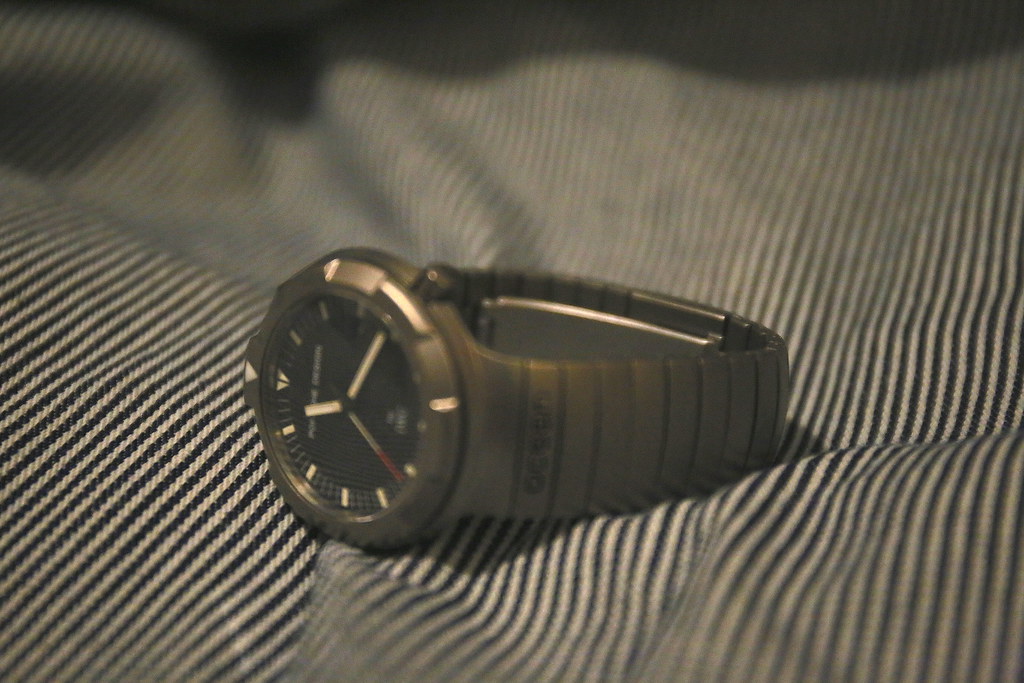 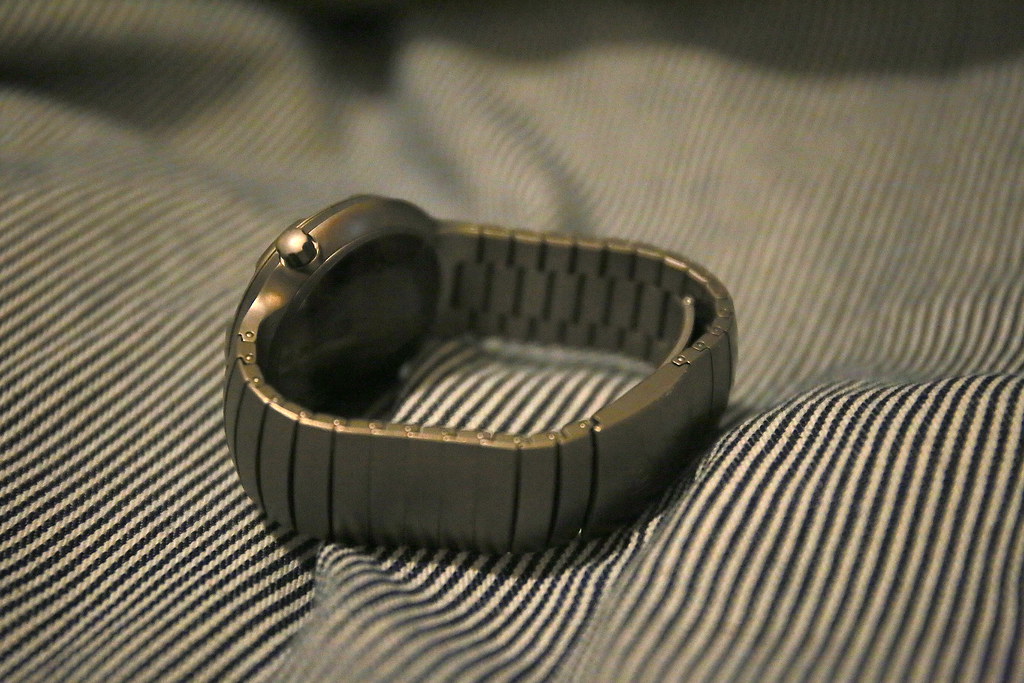 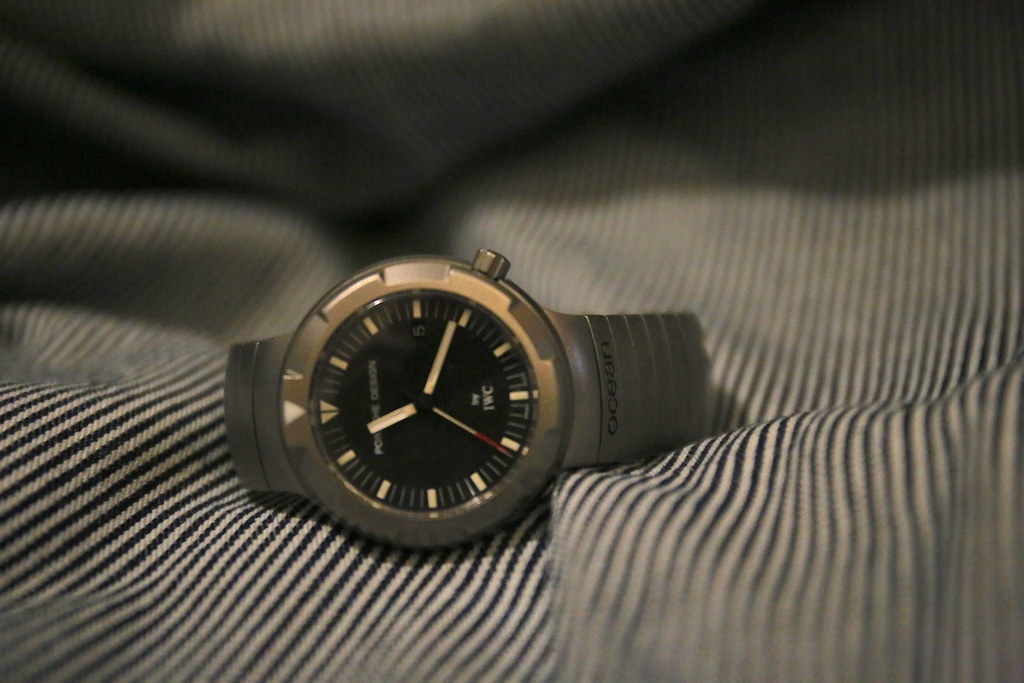 Porsche Design took a radically different approach. They managed to make a smaller device by using the water pressure to improve water resistance. The pressure would squeeze the case tighter and tighter. This made it slimmer and necessitated the design of curves. This also make it exceptionally comfortable to wear.

In subsequent models of dive models IWC went back to more muscular hard edged designs that make life easier for the manufacturing line. 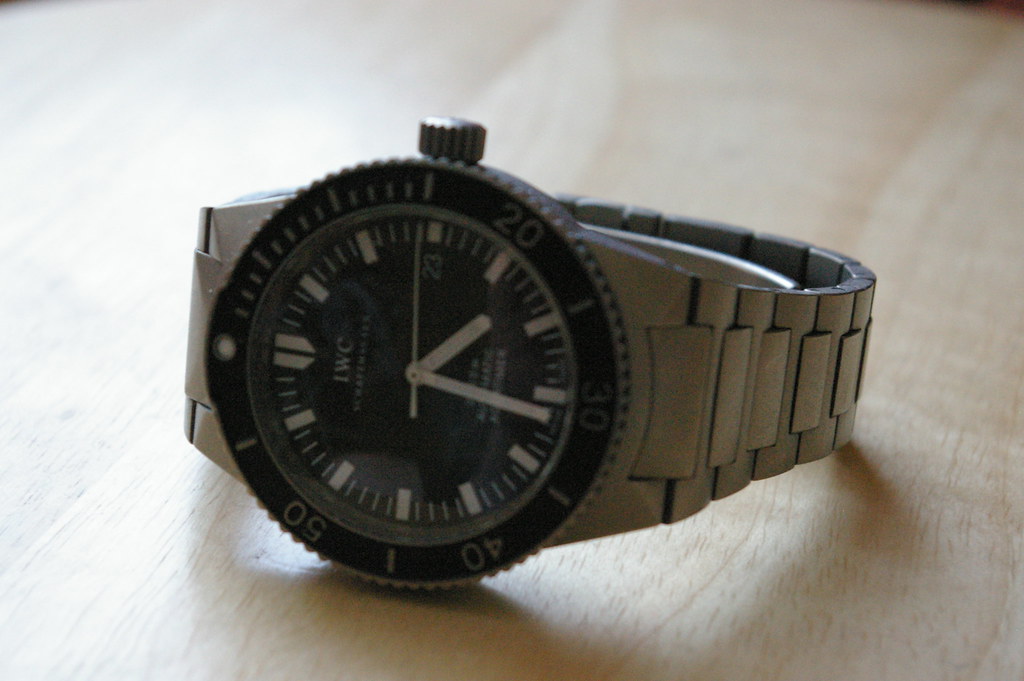 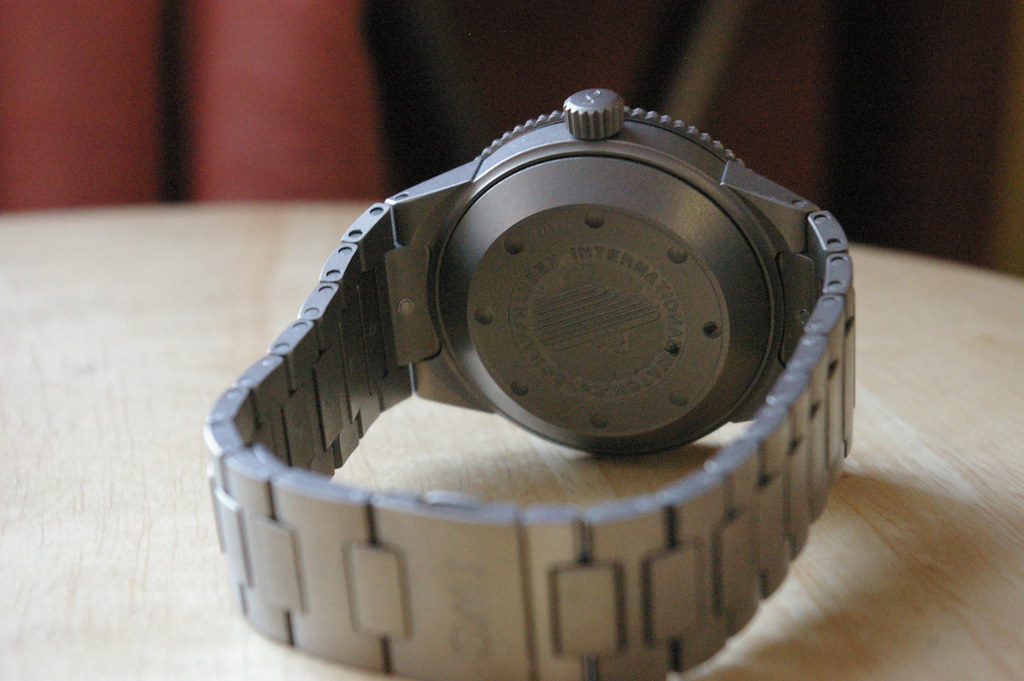 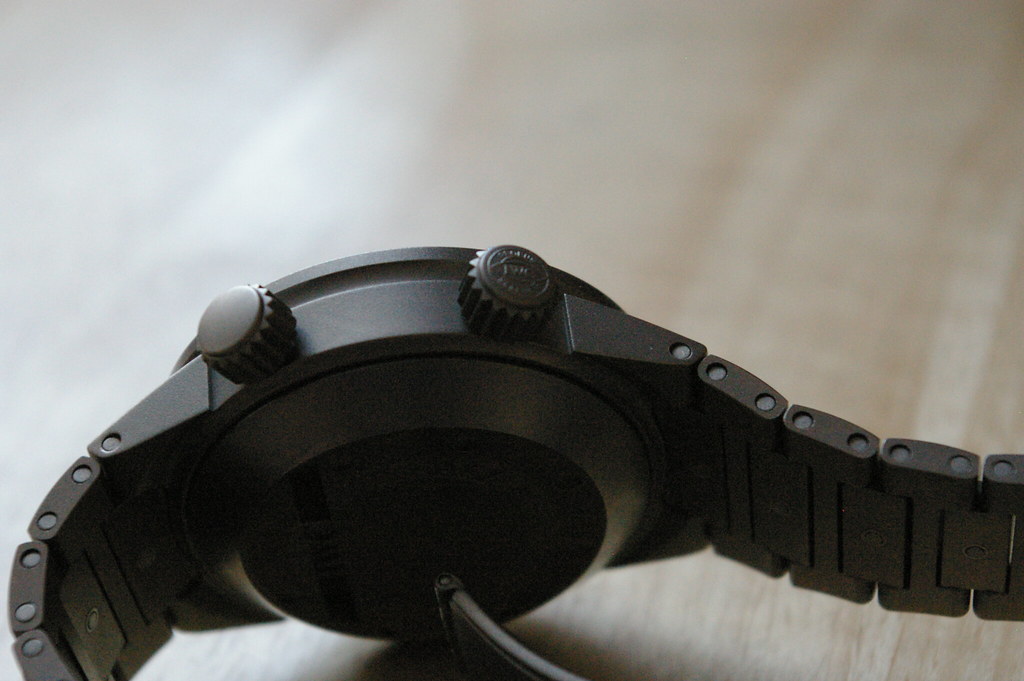 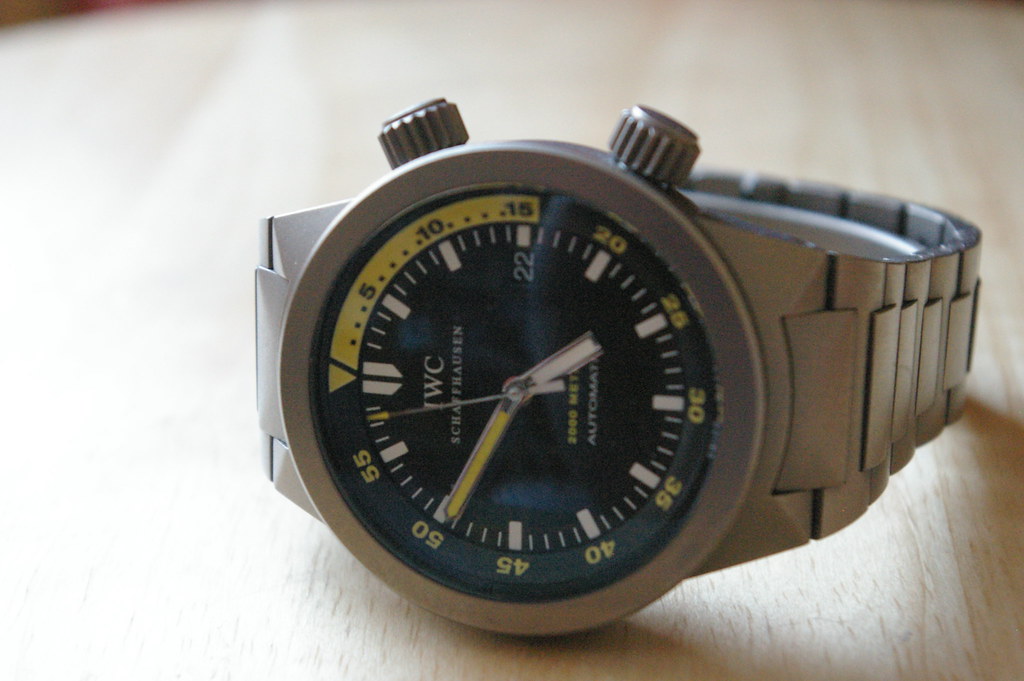 What becomes apparent is that Porsche design was very focused on the end customer experience, but it was at the expense of business considerations. This brings us back quite neatly to design thinking which loses that process function over time.

Apple’s design team not only focus on the product design, but how it can be made. It mean’t thinking laterally about possible process improvement. They went to sweet factories in order to work out how to cast seamless transparent  plastic surfaces. Apple spent large amounts of its cash pile to forward purchase in-demand components and machine tools for factories. Foxconn had thousands of CNC machines working cranking out iPhone cases that would have been unthinkable from other manufacturers.

But most companies aren’t organised like Apple. They have limited resources to implement processes for customers. Conventional business thinking usually tries to reduce costs or outsource as a non-core product.