Twitter’s desktop client on the Mac has been pulled from the app store and won’t be supported any more. It is time to look for an alternative.  What you should choose depends on how you use Twitter, I’ve tried to outline what I consider are the best native Mac apps for Twitter.

The alternative that I use is Night Owl (夜フクロウ or YoruFukurou)  which is a small lightweight client put together by a Japanese development team. I used it historically because it had a small footprint on my desktop which is handy when you a list running in the background. It allows you to use many of the same ‘short cut’ commands that used to be available when you could use Twitter via SMS – it helps in running a productive app now.  I have a breaking news list that I use, this is what it looks like. 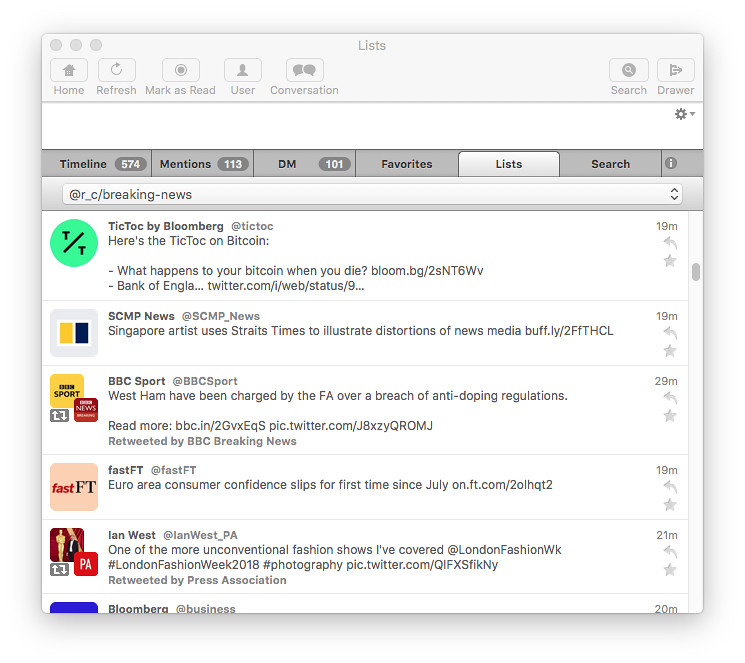 Twitterific is probably the best maintained out of all the Twitter clients for the Mac, it looks similar to Night Owl and costs £7.99 on the app store.

Echofon has a similar layout to Night Owl , but charges you £9.99 for the privilege. It has also hasn’t been updated as often as Night Owl.  Echofon comes in full price and light versions in the App store.

If you are managing social media accounts then Tweetdeck is an obvious option. It’s multiple panels create a screen-wide dashboard so that you can handle mentions, direct messages and keep an eye on trending topics. It’s been last updated in 2015 and I’ve heard anecdotal evidence of it being buggy.

An alternative to TweetDeck is Janetter Pro which provides a similar look and feel to TweetDeck but allows for further customisation including custom wallpapers (if you care about that kind of thing). It also supports multiple languages for the app interface including Japanese, Korean and simplified Chinese.  Janetter Pro was updated in May 2017, it costs £4.99, you can find out more on their website and in the app store. There is also a free version in the App Store. In my opinion Janetter Pro is an overlooked gem of a product if you want a comprehensive dashboard view. If I had to do Twitter community management, I’d invest in Janetter Pro.

Tweetbot is the editors choice on the Apple App store and comes in at a premium price of £9.99, for this you get an interface that can flex between the Night Owl and Tweetdeck style interface design.