The estimated reading time for this post is 219 seconds

This week saw a huge leap forward for Chinese space exploration and the Chinese space program. China landed a space ship on the far side of the moon and is currently exploring it. The Chang’e 4 space ship is named after a Chinese goddess who reputedly lives on the moon. It carried the Jade Rabbit 2 rover. Chang’e was kept company on the moon by her pet jade rabbit.

This is a huge achievement. It has been fifty years this August since Neil Armstrong landed on the moon. NASA has plans for its Saturn rockets, but the actual knowledge to build that size of rocket is being relearned through its SLS programme. NASA engineers now marvel how 1960s era welders managed to manually create perfect long welds in the rocket motors with lost craftsmanship.

Secondly there is the context of the Chang’e project. China builds programmes like the Chinese space program by thinking in terms of decades. It will be doing invaluable research and the space programme may spur Chinese innovation just like what happened in the US during the 1950s and 60s. You couldn’t have had Silicon Valley or many household goods without space programme knowhow. The Chinese would be much more open to harvesting resources from the moon and beyond. In the same way that the Apollo programme was a part of the cold war, Chang’e is part of a wider political context. Premier Xi is focused on China’s rejuvenation that includes

So it was with a certain amount of irony that the Chinese space program published a post on Weibo quoting Pink Floyd’s Breathe from Dark Side of The Moon album. 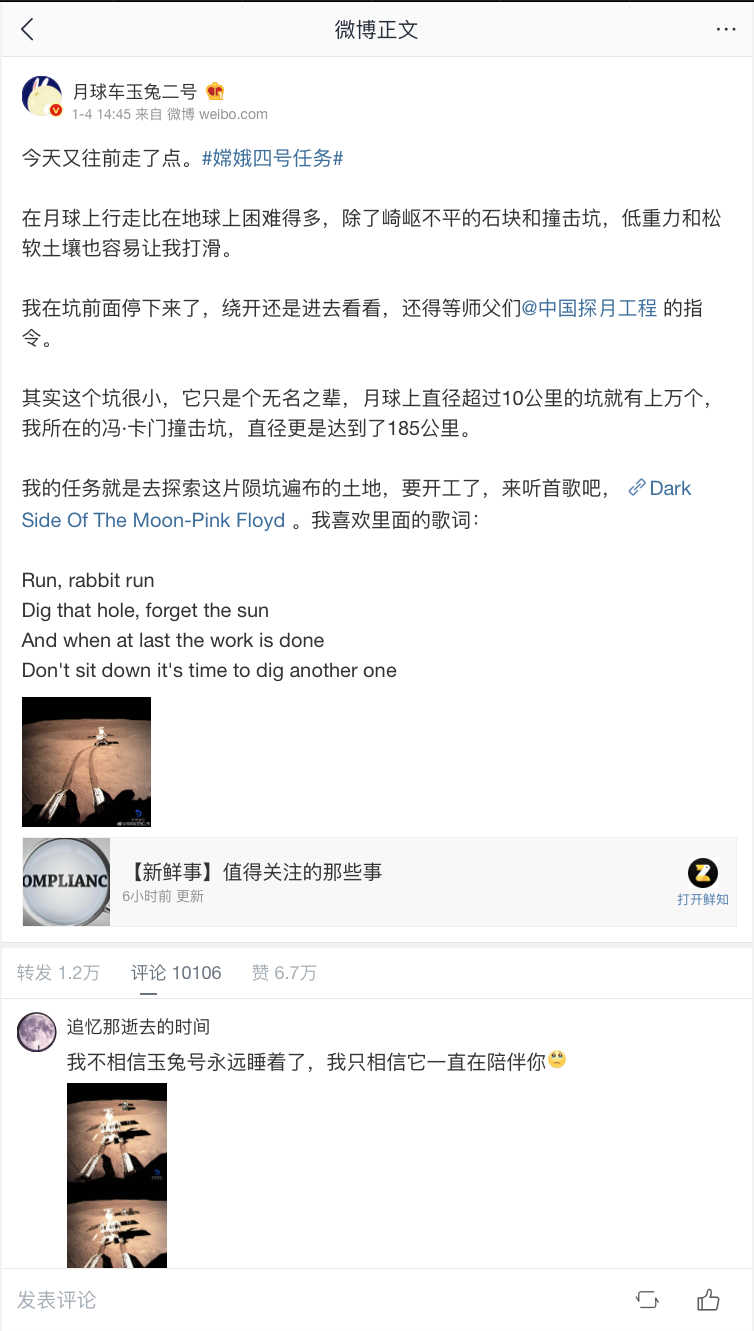 Pepsi tried to tap into the space age excitement with its early entry into the pantheon of this years adverts celebrating Chinese New Year. This is a seven minute long film that’s part of an integrated marketing campaign around the theme of ‘Bring Happiness Home: Reach for the Stars’

This afternoon I have been listening to the this glorious homage to 1980s R&B. Lizzo’s Juice is a great pastiche of TV tropes together with a great song. I discovered it via Matt Muir’s Web Curios. Whilst you’re listening to the song go over and sign up for his weekly newsletter right now. (Don’t worry I’ll here until you come back).

This week has been CES in Las Vegas, which explains why the magazine type stories in news programmes have been about gizmos or robots. I found the show pretty disappointing this year. The biggest news was more of a business story. Apple has managed to get iTunes movie and TV series store on Samsung TVs. In addition several brands signed up to support Apple’s Air Play standard for video and HomeKit standard for your internet of things. Quite what all this means for Apple TV sales is another thing. What I found far more interesting was exploring the Consumer Electronics Hall of Fame – IEEE Spectrum. Going through it is instructive. Zojirushi’s Micom Electric Rice Cooker from 1983 brought early artificial intelligence into the home with its use of fuzzy logic to cook rice to perfection. Fuzzy logic then went into image stabilisation and auto focus on cameras and camcorders. Fuzzy logic sold on the benefits and concealed the technology from western consumers. Machine learning techniques are likely to become common in a similar way rather than the current hype. I still lust after the Wadia Digital 170i Transport. 46 years after launching the Technics SL-1200 turntable, they rolled out the SL-1200 Mk VII. This is particularly interesting as they originally stopped production a decade ago and scrapped the tooling. At the time, there wasn’t considered to be enough interest to keep production going in Osaka.