I just had a chance to read What Happened am glad that I didn’t pay good money for this book. I found it both insightful and disappointing in equal measures. Clinton conveys her emotion really well. She also deeply loves power and policy. I don’t mean that in a megalomaniac way; but in a deep love of the job. The emotional release in the writing lacked the kind of intellectual rigour and analysis that she could, but didn’t apply in this book. Clinton is still mystified why she didn’t resonate with Americans.

The sub-text is that it wasn’t her fault she lost to Trump but ‘them’ for disliking her and winning. It felt as if Clinton was writing for insiders. 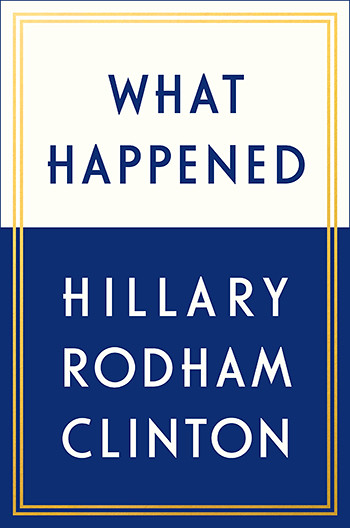 I am sure What Happened would resonate well with:

My guess this is partly why my initial reaction is that What Happened was the equivalent of a commemorative programme. She vigorously name checks everyone involved. (I am sure that they’ll buy a couple of copies, in a similar way to selling a high school year book.) Much of her ‘mistakes’ are turned into sins that her opponents or the media clickbait business model. Clinton tries to justify things in the book a bit like the late Paul Allen’s biography Idea Man. Her justification is sometimes dressed up as introspection.

The first part of the book is about coping with grief. One gets the sense of how losing the presidential election was like a death in the family for Clinton and her supporters.

Clinton tries to lead by example to give hope to the middle and right of the Democratic Party that she represented.

Clinton is right about the fallacy of storytelling which provides easy closure for the media and voters. It doesn’t however provide the colour required for serious stories. This was the reason why Italian spaghetti westerns felt more authentic than Hollywood.

Clinton seems to think that more of the same of her brand of progressive politics is the answer. This seems a world away from the current Democratic Party direction.

Clinton differentiates her stance of listening, rather than Trump’s grandstanding. What also becomes apparent is that Clinton needed to ‘reconnect’ with the public, whereas Trump had the pulse of the zeitgeist. Clinton seemed to have a lack of awareness on this.

Her description of her marketing machine being constructed was interesting. Yet there was other curiously analogue examples of insight. Clinton wants to see how a progessive Democratic candidate will do in the Ozarks. They contact a trusted advisor in the area. He recommends reaching out of a country store owner in the middle of the constituency. The man fed back on how identity politics and government inaction will see the seat go Republican.

Clinton doesn’t seem to take on board how emotion was so important. Secondly, Clinton thought that the togetherness platitudes would not come across as more of the same.

She wants to make sure that you realise data was an early focus on her campaign, but . Clinton praises her team and throws her 2008 team under the bus.

To quote an old advertising maxim:

Clinton got this in terms of her visual branding (her appearance) she made her gender as a candidate familiar through her consistent trouser suit uniform, but failed to grasp it in terms of the wider policy approach. She was selling the familiar but failed to make it surprising.

Her description of her daily life tries to imply, ‘I am just like middle-class people you’. But the problem is; middle class people have the time to read four daily papers, or have a residence manager to curate reading materials. Clinton admits that neither her or Bill had nipped to the store for an emergency bottle of milk, since there has always been people helping out since Bill was first appointed Arkansas state governor.

The team’s diet of hot sauce with everything, protein bars and canned salmon is given a good deal of coverage. Artisanal food fetishised in the copy is again middle class virtue signalling. There was no Red Bull, no pizza.

Clinton goes deep into each activity explaining what it feels like to go through things like media training and debate preparation.

It was interesting that the selfie had risen to prominence in Clinton’s election campaigning, compared to her last serious run in 2008. She nails it when she talks about how it limits connection between the politician and the people, eating into brief talk time.

Clinton also does some interesting thinking about what future policy making should look like and how it should be merchandised – as what creative marketers would call ‘the big idea’. Citizens don’t read policy papers, but they remember big, audacious simple things they can grok.