With the rise of technology sector LBOs it makes sense to reflect on the Silicon Valley use of stock options and going public. In the past the Silicon Valley stock market dream was relatively simple. Hard graft with a possibility of a reward in terms of a stock market listing or a buyout by a larger technology company eager for the new, new thing.

Now things are different, businesses like Google, Uber and Facebook held out for as long as possible to go public. Technology companies from Apple to Zynga have been punished repeatedly in the market for real and perceived mis-steps. Activist investors charge around Silicon Valley in a similar manner to the way they bullied the S&P index in the 1980s. 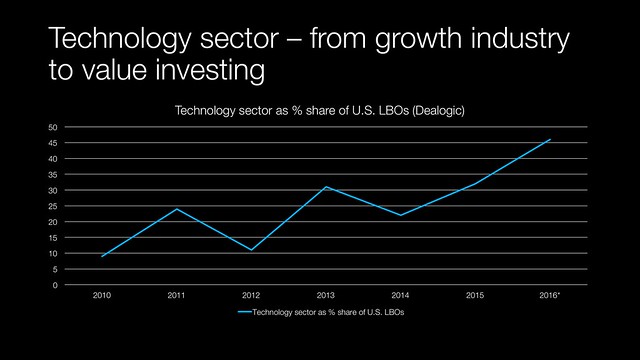 Now technology companies are making up almost half of private equity LBOs. An LBO is a leveraged buy out; its where a prospective owner uses a mix of loans and their own money to purchase a company. The company usually has a steady cash flow that is used to pay down the loans and associated interest. These businesses are generally discounted because they are no longer perceived as being high growth companies.

The private equity owner looks to either flip the company to another purchaser, or flip parts of the company to pay down the loan. Either flipping or piecemeal sales are designed to raise more value than the original price paid.

Since these businesses are servicing large amounts of debt, they are vulnerable to fluctuations in their business conditions or interest rate rises. For example, Irish telecoms network Eircom defaulted on corporate bonds in 2012, having been through a couple of LBOs in the previous decade.

There always has been some LBOs in the Valley, Computer Associates bought up rivals and ran them as part of a conglomerate, with a focus on maximising the business cash flow rather than market share growth. General Atlantic Partners and Cerebus Capital Management had specialised for a long time in LBOs of mature ‘also ran’ business software companies with regular support customer support contracts. But the recent growth in LBOs is unprecedented for the technology sector. More on Silicon Valley here.

More information
Private Equity Has a Crush on Tech | WSJ – paywall
What are the major reasons behind Yahoo’s drastic downfall?
Barbarians in the valley