In covering MWC 2015 yesterday I talked about the pre-event Sunday consumer product launches. These launches continued into Monday with Microsoft revealing more about Windows 10 alongside some mid-range smartphones. Sony’s press event was notable for both its style and content. Sony took a lower key approach to the show than in previous years. It hinted in interviews that this was part of a wider strategy by the company to shift Sony’s launch calendar, from being around the latest processor updates, to leading with consumer experience improvements. 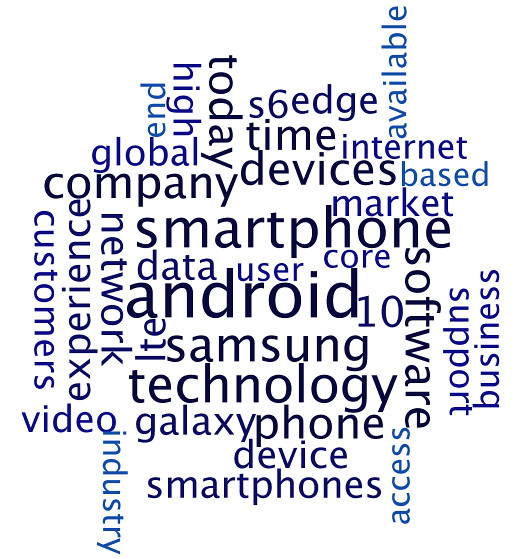 Looking at the online conversation around MWC on Monday, it unsurprisingly dominated by consumer devices. In particular hardware specifications of the devices, which shows just how much of a mountain Sony will have to climb in trying to change the event narrative away from device ‘speeds and feeds’.

Mark Zuckerberg’s keynote at the event looked to downplay the role of internet.org rolling web access out in the developing world. In the reality his keynote was on the fault line of a chasm between telecoms providers and internet (or ‘over-the-top web’ to use Deutsche Telekom’s parlance) companies such as Google and Facebook.

Messaging stripping away traffic from SMS, Project Loon and Internet.org have all been factors of concern. Google’s announcement that it planned to become a wireless carrier through a global set of MVNO (mobile virtual network operator) agreements hasn’t helped either. César Alierto, chief executive officer of Telefonica talked of moving the debate from net neutrality to a wider digital neutrality in order to create a level playing field for both carriers and internet companies.

This divide between carriers and internet companies has been characterised by Bloomberg as part of a larger US/European digital divide, with large US companies having a greater market capital that they can use to buy up European rivals and push through developments in the face of carrier resistance.

Another gap between the US and Europe was the continued importance of digital privacy at the show. Silent Circle rolled out a more polished version of the GeeksPhone-based Blackphone and a tablet companion. Finnish security company F-Secure promoted its Freedome VPN as a way of dealing with PRISM-style internet data collection.  Finnish mobile operating system company Jolla announced SailfishSecure in association with SSH Communications Security.

Digital privacy wasn’t only a business opportunity for gadget makers, but also of concern to telco CEOs, who where concerned that a lack of consumer confidence in privacy would adversely affect business. Vodafone, Telenor, Deutsche Telekom and Telefonica all called for policy makers to provide stronger safeguards for citizens data privacy and digital security. This wasn’t solely altruistic as carriers saw a potential role to play in helping consumers securely manage their digital identity. How realistic that might be after the Gemalto data breach remains to be seen.

Finally, the news that caused most confusion in Racepoint’s European HQ was that Ford showcase prototype MoDe electric bikes at their MWC press conference – I know we don’t get it either.