In a tale of fact imitating fiction the US Navy is looking at ways to support the military in future conflicts by creating bases which allow ships to act as a combined space, which they call sea basing (or seabasing). The reason for this is in battles with the likes of China they may not have the luxury of a nearby land base like they have had in the Middle East, so they need to provide a flexible platform that will perform a similar function including floating docks and logistics.

Being out at sea and operating in this way helps put the force out of range of enemy weapons as well, or what the US Marines describe as exploit the sea’s maneuver space.

This includes ramps and sensors that would allow service men and equipment to exchanged from ship-to-ship with as much ease as moving around a base on land. Presumably this would have some sort of affect in terms of increasing the data network connections between ships to help them function better and more cohesively. 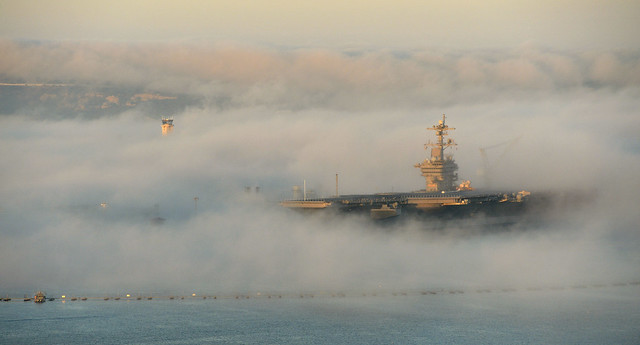 The idea of seabasing echoes the carrier and lashed together boats of Neal Stephenson’s Snow Crash. Snow Crash is a classic work of cyberpunk fiction written in 1994. In the book refugees play a key part in the plot. The refugees have attached themselves to a privatised aircraft carrier owned by a media company that is heading to the US. More design related content here.