This chain of thought on Brexit segmentation got fired up when my Facebook filled up with calls to petition British Airways to strop the distribution of the Daily Mail, mainly because of headlines like: 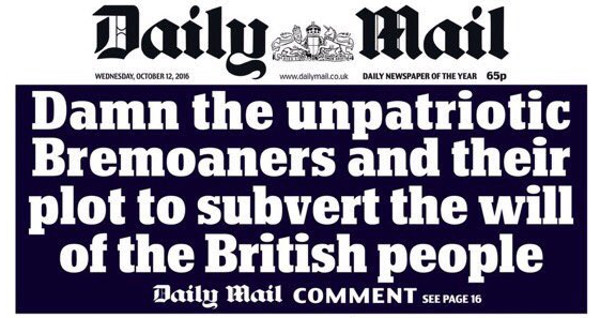 So can a brexit segmentation be used as part of a marketing strategy? There are at least 16 million consumers that would broadly fit within the brexiter segment. When one looks at the demographic split of leave versus remain voters you start to see clear segmentation ideal for marketing opportunity.

You already have brands doing this in the U.S. for instance standing up for LGBT rights. Unilever’s Ben & Jerry’s have come out in support of Black Lives Matter.

Now lets look at research done into the demographics of the voters.

Much has been made of the splits in UK society:

Young people who voted tended toward Remain; the older you were the more likely you would be a Brexiter

The AB social group (broadly speaking, professionals and managers) were the only social group among whom a majority voted to remain (57%). C1s divided fairly evenly; nearly two thirds of C2DEs (64%) voted to leave the EU

Nearly two thirds of Labour and SNP voters (63% and 64%), seven in ten Liberal Democrats and three quarters of Greens, voted to remain

The correlation between class and voting broke down in Scotland and Northern Ireland were working class areas outside major cities narrowly voted to stay.

Some of it was certainly a protest vote, large swathes of the country feel that they have been ignored by a professional city-orientated political class. As the Political Economy Research Centre reflected:

The geography of leave voters reflected the economic crisis of the 1970s, not the 2010s.

Concerns about financial future and family’s well being were stressors rather than root causes. Research attributed it to more deep seated attitudes that shaped world view.

Work by the London School of Economics showed that when  attitudes were mapped against income level; working class status wasn’t as much a deciding factor as pollsters would have had one believe, instead it seemed to correlate close to personality traits.

Back in the 1950s American academics sought to answer the question of how Hitler and Mussolini  could have become so popular in what were initially democratic societies? What they and subsequent research found was that a certain amount of  a given population tend to have more of a closedness (or authoritarian dynamic) in their world view.

This can be amplified through:

They look for strong leaders and simple answers. Nostalgia and the past is reassuring. They are less interested in ‘sensation seeking’ and want to fit in.

Liberal values tended to be more orientated towards aspects of openness that embrace newness, sensations, innovation and change.

Much was made of a post-election Google Trends spike on searches such as ‘What is Brexit?’ as a demonstration of a key democracy failing. According to political scientists voters having an understanding of what they are voting for is key in a democracy. If it were true it would cast a shadow on the likelihood of the underlying electorate traits being useful for segmentation. The Google Trends story wasn’t necessarily correct; (but it was great fodder for the news cycle)

There are a number of British brands on the high street that are geographically focused for whom taking a resolute Brexit stamp would not cause brand harm or investor protest. Examples of this would be Tesco – who have pared back their international footprint and are likely to continue to do so, Wetherspoons, Poundstretcher and payday loans brands like Wonga.com.

For more internationally orientated publicly listed companies, the UK becomes less attractive. Senior government thought leaders such as conservative MP John Redwood have made it clear ‘interference’ including voicing concerns about the Brexit process would be unwelcome.

…companies who did not stay silent on the country’s EU membership would pay a “very dear economic and financial price”.

As the UK becomes a more isolated economy  two steps behind its European peers there could be a temptation to spin off their UK business. This could happen in two ways.

Selling on local gem brands (brands with only significant sales in the local country). Examples could be brands like:

Alternatively disposing of UK subsidiaries would make sense as Brexit represents a permanent reduction reduction in profit margins. For someone like McDonald’s Restaurants, that would likely mean pressing ahead with an ‘all-franchise’ model in a similar approach to what it has taken recently in China.

In order to sell they are likely to require some sort of assets rather than just a sales agreement with the parent company. If they have become only a UK sales organisation, then the viability of this approach depends on the supply chain. One way of adding value into the supply chain would be for these businesses to open up a direct sales channel.

Companies like Unilever already look at how they can integrate into supermarkets supply chain, with ‘buy it now’ buttons on their own site that take you to their online retail partners. They could also open up a direct e-commerce channel; given the Marmitegate debacle with Tesco; expect examination of alternative business models like America’s Dollar Shave Club and Amazon’s Dash.

Modern international brands are already used to marketing towards the ‘open consumer’ who was likely to vote remain. Products that feel up to date, innovative and socially responsible.  A classic example would be Dove, Innocent smoothies, AirBnB or the average family car. Using a brexit segmentation would feel uncomfortable or just wrong for these brands.

Marketing to the pro leave part of Brexit segmentation

A local business for local people with brands that appeal to leave voter demographics could be more explicit in courting leave voter’s spend utilising a geographic and demographic aspects to Brexit segmentation.

Tapping into the ‘authoritarian outlook’ would mean tapping into nostalgia; throw-back branding and possibly rolling back political correctness in the name of common sense.

An extreme outcome could be Robertsons bringing back their original Golly character; though thankfully I suspect that would be step too far – even in post-Brexit Britain.

Rejection of expert is partly down to wanting a reduction in complexity. This has huge implications for a wide range of products, particularly in the financial services sector or mobile tariffs.

Choice is the enemy, a simple product, down-to-earth, unambiguous in its claims. Mobile tariffs without bolt-on features, complex phone upgrade cycles or value-added services. In the case of pensions and insurance, with the assurance that they could help ward off a sinister future full of negative change rather than rich rewards. Perceived good value wouldn’t do any harm either.

In terms of how the product or service fits into the Brexiter’s life it is less about being part of a creative expression of individuality. Instead it is more about the ‘grey man’; blending in. Blending in is a threat coping mechanism, a form of risk reduction (think Dilbert cartoons). It shouldn’t mistaken for being more community-spirited, instead the community is of mutual convenience – a shoal of people.  A consequence of this is that persona creation becomes harder or derivative, the stellar insight from the planner loses its gloss. Agency creatives are likely to struggle with consumer empathy beyond utility.

From the advertisers perspective appealing to leave brexit segmentation means blunt simplicity rather than clever creative. Audience reach is still important, but a higher frequency is likely required to achieve a comparable impact. This is to get over the Brexiter’s higher degree of inertia to marketing and making them feel that accepting the brand is part of conforming within society. It is part of the eco-system, traditional brands have an advantage due to their familiarity and heritage. Even if its a new brand it feels as if it has always been part of the consumers fabric.

Ben & Jerry’s came out in support of Black Lives Matter. Naturally, some cops are freaking out | Fusion
Business Leaders Speak Out Against North Carolina’s Transgender Law | Wall Street Journal
These 70 Corporations Want to Block North Carolina’s Transgender Bathroom Law | CBN News (US news outlet for the evangelical christian audience)
How the United Kingdom voted on Thursday… and why | Lord Ashcroft Polls
How Demographics Decided Brexit | The Market Oracle
How has Brexit changed the mindset of a nation? | Bucks New University Business School
How do Britain’s ethnic minorities view the EU referendum? | Kings College London
Making Sense of Brexit – the data you need to analyse | UK Data Service
Who is voting to leave the EU and why? | openDemocracy UK
Thoughts on the sociology of Brexit | Political Economy Research Centre
The 2016 Referendum, Brexit and the Left Behind: An Aggregate-Level Analysis of the Result by Goodwin and Heath – PDF
Businesses that speak out for Britain’s EU membership will be punished, vows John Redwood | The Telegraph
UK voters don’t understand Brexit, Google searches suggest | Ars Technica UK
Marmitegate is ‘just the tip of the iceberg’ as cheese, chocolate and wine all face ‘punishing tariffs’, Nick Clegg claims | The Telegraph
It’s NOT the economy, stupid: Brexit as a story of personal values | British Politics and Policy blog | LSE
Brexiters would rather trust the wisdom of ordinary people than the opinion of experts | Quartz
The One Weird Trait That Predicts Whether You’re a Trump Supporter | Politico
Brexit Voters: NOT the Left Behind | Fabian Society
Authoritarianism and Political Behavior by Janowitz & Marvick | Public Opinion Quarterly (Summer 1953)
Voters’ personality traits in presidential elections by Barbaranelli, Caprara, Vecchione and Fraley | Personality and Individual Differences 42 (2007) – PDF document
Personality Traits, Partisan Attitudes, and Voting Behavior. Evidence from Germany by Schoen | Political Psychology (August 2007) – PDF document
Grey Man Strategies 101: Peeling Away the Thin Veneer of Society | Imminent Threat Solutions
How To: The Modern Grey Man Philosophy | Loaded Pocketz
EU referendum results | The Electoral Commission