I started thinking about public relations role in the world whilst listening to The Holmes Report podcast featuring Michael Frolich of Ogilvy UK. There was a particular focus on brand communications rather than corporate communications, public affairs or investor relations. It’s worthwhile going and having a listen; I will still be here when you come back. There were two themes that stuck out with me.

I wrote some notes about each focusing on where my view differed from Michael.

Public relations role and relationship to other disciplines

Should the PR industry have hang-ups about its profession versus other marketing specialities? No public relations role in the marketing mix is clear and valid.

In terms of account billings, public relations is still the junior profession compared to advertising, creative agencies and media agencies. The lower fees represent a greater degree of risk in outcomes for the brand than paid media.

From a client relationship perspective, whether public relations role is as an equal discipline really depends what the client is trying to do. There is a propensity to use different marketing agency functions based on what the overall marketing strategy is looking to achieve. 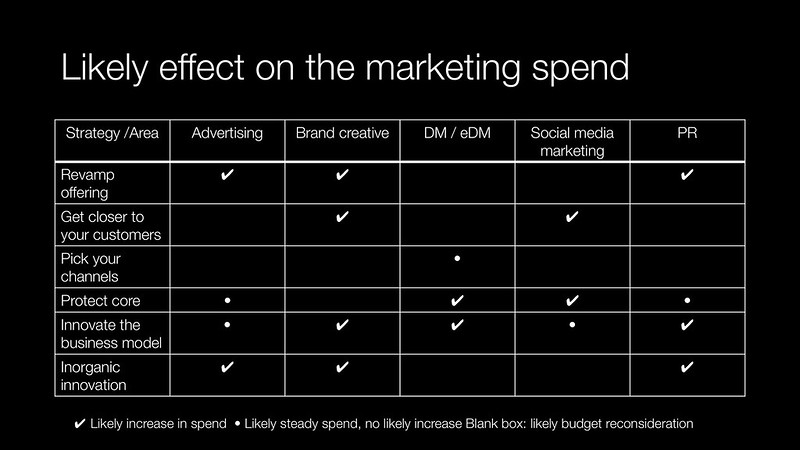 Public relations agencies are not the sole source of expertise in generating ‘PR coverage’. In some respects many marketing agencies already fulfil a public relations role, but won’t describe it in that way. It tends to be attached to their social teams and might be called something like influence, content marketing or earned media. This tends to be in some of the media agencies at least. Ad agency creative if sufficiently emotive can foster talkability and social sharing – which is another form of earned media that is usually considered to be also public relations role.

Historically Japanese advertising agencies like Dentsu have sold public relations as an integrated part of their advertising led programmes. The perception by western agencies has been that PR was thrown in for free like a plastic toy in a box of breakfast cereal. In reality the Dentsu Way, called cross marketing –  is a holistic, tightly integrated approach, though public relations was definitely the junior discipline.

It would would be wrong of the industry to assume that they are the only experts in this space. I also believe that public agencies should have more to offer than generation of earned media, more on that later.

A lot of PR leaders I’ve met don’t understand public relations role in the client’s marketing strategy and when it will make the biggest difference. I’ve never heard an PR agency leader turn around to a client and say ‘advertising or direct response marketing is more suitable for your needs’. Clients tend to believe that they need to support each initiative that they get budget for, even if the contribution that their efforts make are marginal. It shows that they have an ‘A-grade’ team spirit, but is harder to justify from a strategic point-of-view and may even devalue the currency of marketing communications-orientated PR in the business.

It would be great if the CIPR could mandate PR leaders to read Sharp.

It would be great if the CIPR, PRCA or PRSA could make this happen.

Frolich starts to get some of the points right about the fraught relationship between planning as a discipline when embedded in PR agencies. I would be far more aggressive and say a lot of PR senior leaders aren’t ready for it. Part of this is the generalist nature of public relations roles and also business structure within clients and agencies.

Many PR agencies are run on very little capital. They’ve always had an asset light model and just been pure operating expenses. From a knowledge perspective you are seeing new hires being brought in at a more junior level than the people that they replace which will have a knock on effect throughout the industry.

Securing funding for any kind of tooling beyond media databases is really hard when you’re working agency side.  That it’s just the cost of doing business in the industry nowadays struggles with a culture that tries to bill these back to a specific client. Which also explains why PR often struggles to present its ideas.

I’ve known agencies being reluctant to subscribe to publications where their clients might get coverage or media monitoring services. Justifying social listening or SEO tools is really painful. I know, I fought that battle trying to get social listening tools into the business. It is nigh on impossible trying to get a WARC subscription. PR agency clients tend to value and pay for direct action tasks and reporting, not thinking, analysis, strategy or measurement. Having worked as strategist who has worked in PR agencies and other disciplines I ended up having to pay for some reports out of my own pocket when I was agency side and building up my own library of reports and presentations over time.

This sole focus on direct action tasks probably explains the earlier points I made about agency leaders not turning around to a client and pointing out the alternative approaches they should be taking instead of PR to address a particular marketing challenge.

William Gibson in his Blue Ant trilogy of novels (Pattern Recognition, Spook Country and Zero History), discusses PR as part of the plot. He enlightenedly considers PR beyond media relations. Instead he talks about its role mediating relations between an organsiation and its public. PR is considered by him to have its finger on the pulse of the zeitgeist. That should mean that planning is a greater fit than it is in reality. So an opportunity is there, but whether the industry can really step up to it en masse is quite another matter.

Data and insights sharing between agencies of different working on the same project needs to improve. Often PR plans are done in isolation of planning process and IF YOU’RE LUCKY then recut to incorporate insights.