The estimated reading time for this post is 259 seconds

With the Yahoo Q2 2015 progress report on product prioritisation  – Yahoo! published a list of properties that it was closing down and services that it was changing support on over the next few months. Most of the coverage amongst the people I follow has been around the shutdown of Yahoo! Pipes, as despite its flakey behaviour it was tremendously useful for putting together cheap, fast services to help with social media monitoring. I ‘built’ monitoring pipes for the likes of Microsoft and AMD after I had left Yahoo! that included careful key word filtering. This allowed them to take this feed and syndicate ‘good’ news machine translated into different languages on different micro-sites. This ‘Pipe building’ process took just a few hours.

My friend Mat Morrison had put it up to much more inventive uses.

Yahoo! Pipes, like the Fire Eagle location service came out of a golden age of web development. An influx of talent into the business like Bradley Horowitz, Simon Willison, Stewart Butterfield, Tom Coates and Joshua Schachter brought with it a web 2.0 philosophy of data being:

But enough eulogising; Pipes was an interesting idea that never got the support from consumers or Yahoo! that it needed. The service was flakey at times, if it was a car it would have been a late 1970s/early 1980s vintage Alfa Romeo or Lancia – it was that bad. It is obvious from the Yahoo! Pipes blog that it has been in a mode of minimal maintenance for years – the last post prior to the shut down notice was posted in 2012 to outline a work around from Yahoo! shutting down its Babelfish translation service (which was originally on AltaVista.com in the late 1990s and relied on technology licenced from Systrans).

Lets look at some of the other services that Yahoo! has sunset this time around.

The market specific services are interesting, as they paint a picture of Yahoo! under-performing across international markets and in sectors where it previously had a strong advertising offering. Take the cars section across the main European markets, looking at the UK offering – there is no page takeover by a car brand, there is no sponsored content and there is two banner ads (one for AutoTrader, one for BSkyB), one tiny rich content ad at the bottom of the page for the new Terminator film and one re-targeting module. If this is an indicator of what other European markets are like then automotive advertising at Yahoo! Europe is in a bad way.

TV and film properties have little to no ads on the front page, again no takeovers or sponsored content. So Yahoo! seems to be struggling with getting advertising spend in two key sectors.

If we go to Asia, the move out of the Philippines is particularly interesting, presumably driven by advertising opportunity – or the lack there of. But when you look at the economic indicators of the Philippines, there is a consistent growth predicted in retail sales according to Statista 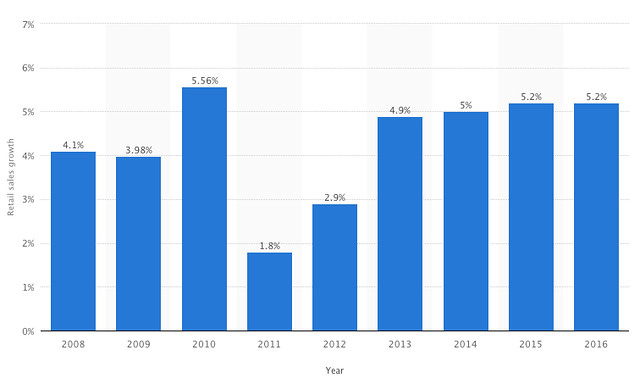 According to Ken Research, the Philippines online advertising market grew with a compound annual growth rate (CAGR) of 43.4% during the period 2008 – 2013 and is predicted to grow almost 15% CAGR between 2013 and 2018. E-tailing is expected to grow by 101.4% CAGR over 2013 – 2018. So why is Yahoo!, which has been established in the Philippines unable to capitalise on the in-market growth. Is it that Yahoo! sees ways to earn more money elsewhere and the opportunity cost is too high in the Philippines, or is it a broken advertising sales machine?

The closure of Yahoo! Entertainment in Singapore is more curious as Yahoo! still manages to get advertising from major brands. As I write this Oreo has a full page frame running and there is a dynamic banner by group shopping site Qoo10.

Yahoo! Mail and Contacts support of older Macs and iPhones. I was surprised that these were called out. Yahoo! Mail is depreciating support for devices running iOS4 or older and running the native mail application. A couple of things here; given Apple’s expertise at upgrading iPhone users speedily why would this even be an issue?

Secondly,  why does Yahoo! need to make a special effort to support accounts that were presumably using POP3 or IMAP email standards? The webDEV standard would make a similarly curious point about Yahoo!’s depreciation of support for contacts on a Mac running OS X 10.8 and earlier. It just doesn’t make any sense to me.

Former CEO, Carole Bartz famously said of Yahoo! that you can’t cut your way to growth. So what do these ‘product updates’ say about Yahoo!? Over the past two years prior to this update, Yahoo! has already closed over 60 services, where does it all stop? More technology related content here.