The estimated reading time for this post is 294 seconds

I initially looked at app constellations back in 2014, when Fred Wilson put a name to the the phenomena. And every two years or so I have gone back and looked at a number of major internet companies to see how many different types of apps that they had in play.

I originally selected the companies back in 2014 because I felt that they represented the largest and best of their ilk. It skews Asian because the west can be viewed as one eco-system represented by Google, Facebook and Microsoft.

China is an enclosed eco-system; though Microsoft is actively engaged in the app eco-system there. I chose Tencent and NetEase as being my Chinese bellwethers. DaumKakao and Naver were representative of the Korean eco-system which blends highly-used domestic services with western platforms. Finally LINE of Japan (a subsidiary of Korean company Naver) provided a similar bellwether of the hybrid Japanese eco-system which mirrors Korea.

For the sake of convenience I have compared the contents of Apple’s mobile app store for each of the companies. While most of the internet companies have some Android-only or iOS-only apps; the iOS app store is still a good indicator of their app activity.

I stayed true to the definition of app constellations in terms of deciding what kind of app should go in. 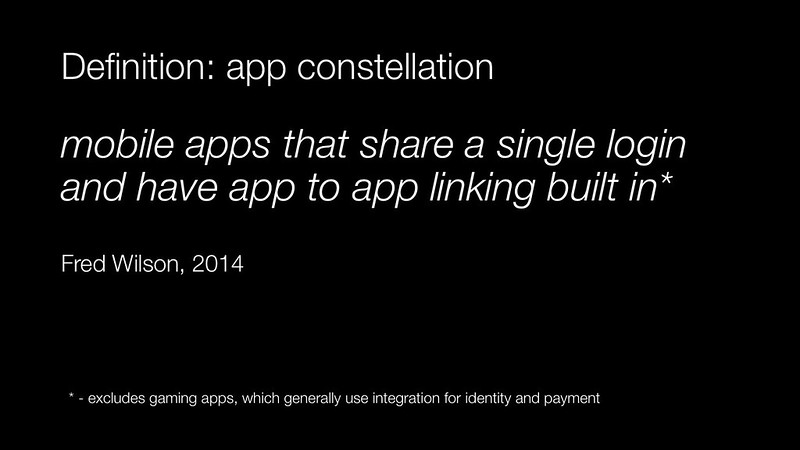 I manually assessed each app, rather than relying on the category that the app had been submitted into. Tencent and Netease, had a number of mobile utilities that aided discussion and kept players updated on their favourite game. These didn’t fit within the definition.

Changes in the environment

Since 2016, a couple of things have changed:

2018 marks over a decade of mobile apps in the Apple store. Many of the major players have delisted almost as many Android and iOS apps as they currently have in the store. This happens for a number of reasons:

I started off by looking at the number of apps. In terms of app constellations:  Tencent, Microsoft and Google were clear winners. 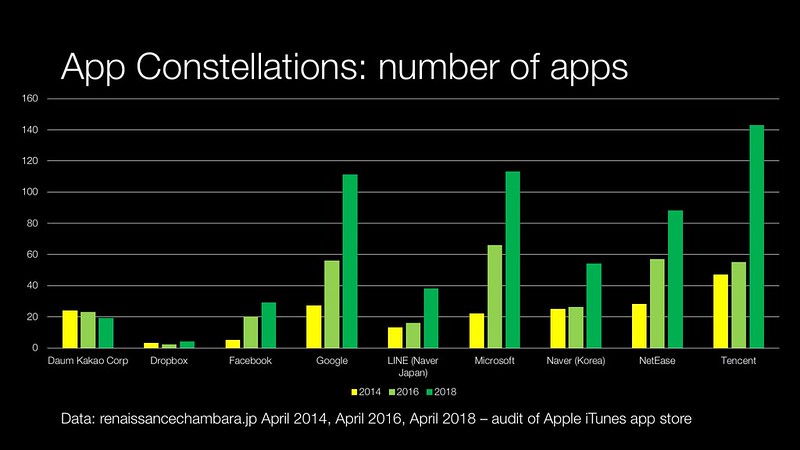 Both Microsoft and Google’s growth has been driven by ‘experimental’ apps that they have put out in the public for their own reasons and enterprise focused apps. 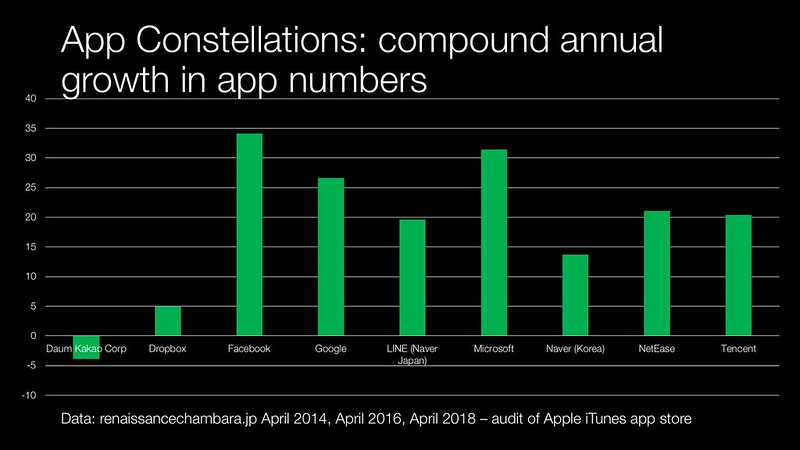 But it was quickly apparent to me that the number of apps developed were only part of the story. What about the rate of change in numbers of apps developed? This would be indicative of the rate of change in moving to mobile. Here both Facebook and Microsoft’s pivot became immediately apparent. The Asian companies looked less impressive as they had been able to keep steady in their focus on mobile.

All of this growth in the number of apps developed by major internet companies is all the more remarkable when you consider the following:

Jargon watch: app constellation – back in 2014 when I wrote this post, it still took me the best part of a week to research and describe each of the apps in the main eco-systems. It would take me much longer today due to the growth in apps

Peanut Buttergate – analysis of Garlinghouse’s original memo about Yahoo! from back in 2006