The estimated reading time for this post is 196 seconds

Easter Week has mean’t that I’ve been exceptionally busy closing things before taking the long weekend break. Easter isn’t a huge holiday in the Carroll household, but its the first break that we get since the Christmas holiday, so always welcome. For many students in Europe Easter signals a hard push on revision in advance of exams. If you are studying or relaxing Happy Easter and Passover.

Kerri Chandler went through one of his Dad’s record boxes, that he hadn’t previously opened. His Dad had been a DJ and inspired Chandler to get behind the turntables himself.

Chandler Senior’s box is an eclectic collection of songs but also had impeccable taste.

You can here it here via Mixmag

Beats in Space put together yet another amazing mix

Amazon leaving China. Amazon bought into an e-commerce business which at the time had just over 10% of the country’s e-commerce market. At the time I had colleagues in Hong Kong who worked on promoting the newly acquired business. A number of years ago I spent an inordinate amount of time creating a three-page document pitch for the Amazon China business. At that time Amazon’s market share was between 1.5 and 2% of the Chinese e-commerce market place. Five years later and its down to 0.6%. 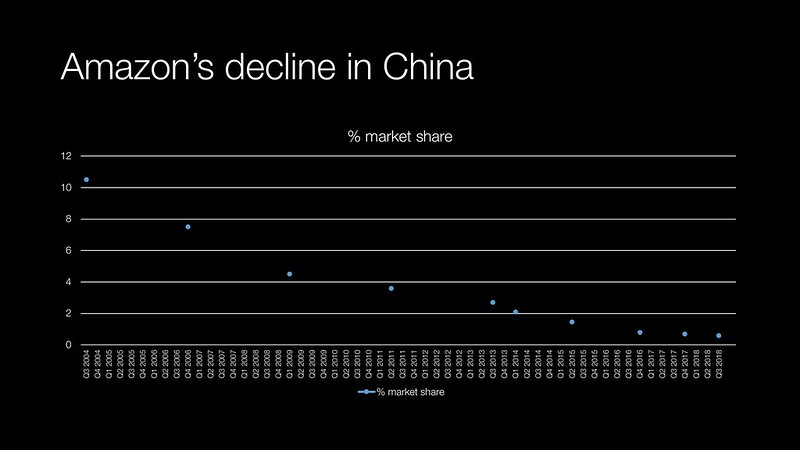 What’s going on? Like most things there are a wealth of factors impacting foreign competitors in China. But one big one that people probably don’t want to admit is that Silicon Valley isn’t insurmountable. For decades the US technology has managed to concentrate wealth and talent in a small place and then benefited from market scale. Europe has been unable to replicate this success. It’s home market is an aggregation of markets that aren’t as integrated or coalesce as well as the US. And US companies exploit the European single market treating as divisible international components illegally.

When US companies like Google, Uber and Amazon hit China they come up against:

Amazon thinks that its cross border business where Chinese consumers buy abroad from online will grow. Consumers do this to get products that they can trust. Domestic platforms have made big gains in this market sector too though.

I wouldn’t buy a Range Rover Evogue, even if I was richer than Bill Gates. But I did love this advert.

And this old video of Jim Carroll talking about ideas as they relate to account planning.