The estimated reading time for this post is 434 seconds

Micro influencers – much of the social marketing today for consumer brand is done through what is called influencer marketing. For a number of these influencers who have a large social following, working with brand has become very lucrative. But one of the hottest tickets at the moment within communications agencies are ‘micro-influencers’; Edelman Digital lists it as a key area in Digital Trends Report . There is widely cited research by Marketly that claims there is an engagement ceiling (at least on Instagram). Once a follower count gets beyond that, engagement rates decline. This micro-influencer sweet spot is apparently 1,000 – 100,000 followers.

What are micro influencers?

Brown & Fiorella wanted to focus on formal prospect detail capture and conversion. It sounds like an adjunct to integrating marketing automation from the likes of Hubspot and Marketo into a public relations campaign.

This approach is more likely to work in certain circumstances:

Brown & Fiorella’s thinking tends to fall down, when you deploy their approach to:

Brand preference and purchase is much more dependent on reach and repetition to build familiarity and being ‘top-of-mind’ as a product.

Most money in influence marketing is spent in the consumer space as B2B marketing tends to struggle with:

(At least outside of the US).

Brown and Fiorella are 180 degrees away from the approach of consumer marketing maven Byron Sharp and his ‘smart’ mass marketing approach. This means that PR and social agencies are often out-of-step with the thinking of marketing clients, their media planners and other agency partners.

Engagement matters less than reach or repetition of brand message for mature sectors or brands. For many consumer brands the drop off in engagement amongst macro-influencers is a non-issue, a red herring.

The only part of the engagement measure that I would be concerned about in that case would be content propagation amongst my defined target audience – how widely had it been repeatedly shared as this would affect total reach.

If the client and planner are using Sharp’s thinking then this audience would be wide, but a certain amount of the propagation would be wasted – for instance outside targeted geographies.

From the perspective of communications agencies I can understand the obsession with engagement being part of their DNA. Micro influencers are an extension of this, as macro-influencers value is increasingly out of whack with their marketing benefits. These businesses are in the offline world are engagement agencies; whether its politicians, regulators, fashion stylists, movie set designers, editors, journalists, TV producers or DJs.

Why are micro influencers a hot topic now?

The most obvious reason is that more popular ‘macro-influencers’ are well informed about their commercial value which has been driven up to a point where they look expensive in terms of cost, even if you charitably look at it on a ‘per follower’ basis.

On the supply side of the equation, influencer representation benefit from having more ‘inventory’ that can be sold at various price points to marketers. So in some respects micro influencers fulfil a market supply need.

Which makes it harder to factor into an econometric model that would help justify the investment in influencer marketing as a contribution to sales.

Let’s have a look at data around a campaign for smartphone manufacturer Huawei. This has been touted as successful by the agency involved, Social Chain. We don’t know the cost as its likely to be client confidential.

What this doesn’t tell us:

Which could then be used to provide an estimate of its contributory factor to sales if you had an econometrics model. You can’t access how it works next to other tactics and there are limited outtakes for the learning marketing organisation.

Many brands have struggled to get their brand in the influencers content in a way that:

Some luxury brands have managed to get around this by keeping control of the content; a good example of this is De Grisogono – a family-run high jewellery and luxury watch brand. They work with fashion bloggers that meet their high standards and invite them to events. (It’s obviously an oversight on their part that I haven’t had an invite yet.)

De Grisogono provides them with high-quality photography of its pieces and the event. They get the best of both worlds: influencer marketing but with a high standard of brand presentation which raises the quality of the achieved reach.

There is a school of thought that micro influencers will be easier to manage in order to assure quality of brand placement. However, micro-influencers are likely to be aspiring macro-influencers and each will have a clear line of demarcation in their own head that they won’t cross. The reality is one of complexity dependent on:

Influencers tend to talk about themselves in terms of the number of followers that they have. However many followers seldom engage with the influencers content. This happens for a number of reasons:

Followers as a data point is not the straight analogue of reach that the industry and influencers would have you believe based on how they present their data.

Reach numbers that are presented are often not that much more useful: 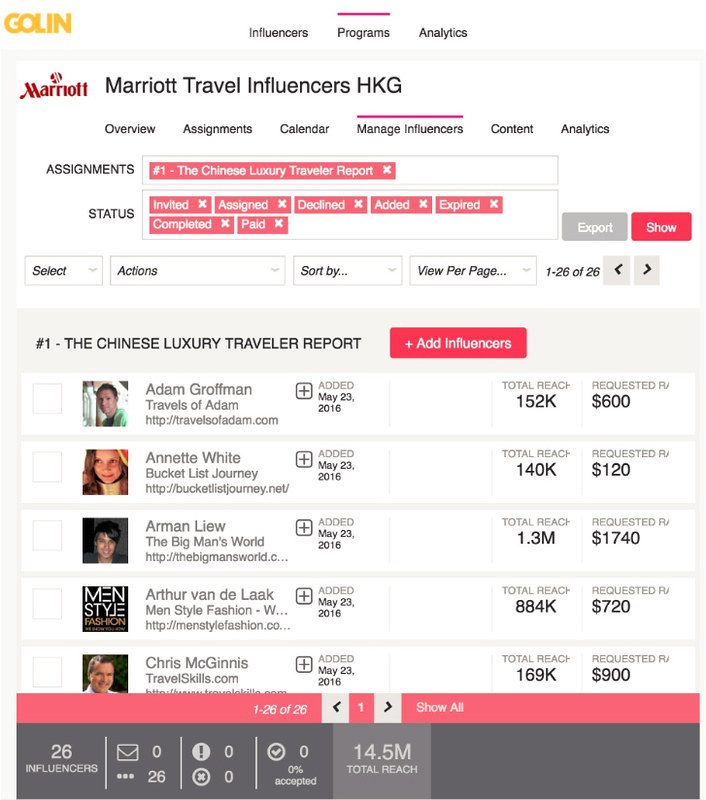 (Data via Golin, TapInfluence and Marriott)

So influencers may give us follower numbers or ‘total reach’ calculations but how do we know what reach their brand placement content is likely to achieve? At the moment, I don’t know how consistent influencers are, I have a ‘personal time’ data project currently in progress on it. More on that hopefully in a later post. There isn’t off-the-peg data that I know of, so I am pulling together a data set.