The estimated reading time for this post is 160 seconds

Sometimes writing posts are a matter of serendipity. I was out walking in Stepney Green and came across a series of electric vehicle charging points. I hadn’t paid any attention to them before.

Right about the time that I noticed them; I saw that the parking bays in front of the charging points were all taken up by petrol or diesel engined vehicles. This being London were parking spaces tend to be a premium, I took a picture of the dissonant scene and quickly moved on. 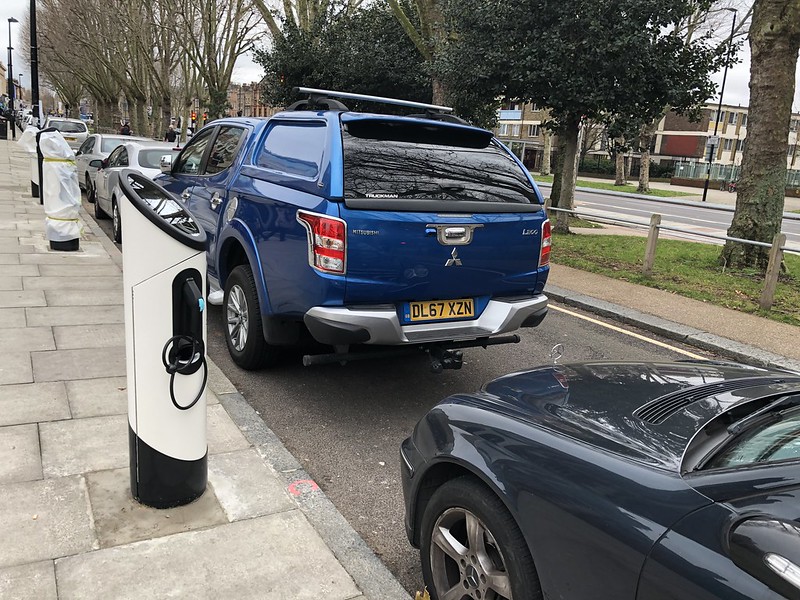 I came in and then read a piece of how truck owners in the US were trolling Tesla supercharging points. Car culture is still huge and overwhelmingly celebrating petrol engined vehicles. But in the US there is a definite sub-text to the protests; one of class war. Metropolitan elite Democrats versus middle America truck-owning Republicans hence ice-ing.

I revisited the photo that I took earlier in Stepney Green. All the vehicles in the photo were mid-range Mercedes cars with the exception of the Nissan pick-up truck. What would the odds have been of a super-mini in the row of parked vehicles if this was just about parking spaces? Was it British ice-ing

It didn’t seem organised; but more of an organic system. Some first ‘person like me’ committed the transgressive act of parking in a charging bay. This then gave ‘permission’ for others to do it as well and the spaces filled up.

There are a number of reasons for a consumer to not want to purchase an electric car when looking for a vehicle:

A bigger and harder to crack issue for vehicle manufacturers is one of values. Electric cars don’t have a culture behind them. They may have good road performance but they are the wholemeal bread of the automotive world. Something you should so, rather than something you are passionate about driving. Internal combustion engines won’t go quietly into the night.

BMW going into formula E and launching the i8 using the design language from the M1 was a nod towards making electric sexy. But on its own its like spitting in a hurricane. One Japanese vehicle manufacturer knew how to make electric (and petrol) vehicles exciting through

Unfortunately for the automotive industry that vehicle manufacturer is Tamiya. Tamiya is a Shizuoka based manufacturer of remote control cars for hobbyists.

Maybe the answer isn’t about marketing but about engineering?

You can change the fuel without changing the excitement, noise or spectacle.

Hydrogen powered combustion engines offer similar energy density and performance to petrol cars, but with water as the waste product rather than carbon monoxide. Battery technology currently relies on a lithium and most of the world’s supply comes out of a high desert in Chile – we’ve replaced one finite resource (oil) with another (lithium and rare earth metals).

Toyota is already experimenting with hydrogen in Japan. BMW have done pilot programmes in the past and hydrogen as been trialled in heavy goods vehicles.