The estimated reading time for this post is 626 seconds

Most of it lacks insight. And at the most basic level lacks precision. Yahoo is an employee who works at Yahoo! or Y! (the Y-bang). It was the best culture I ever worked in; and the most dysfunctional company that I ever worked for. I got to work with amazing people at a company that managed to fumble the ball on opportunity after opportunity. Most analysis you see comes from outsiders who lack insight.

So when I came across this question on Quora and decided to post my answer. I’ve shared my answer on this blog with additional data points and information on ‘Yahoo’s downfall’. 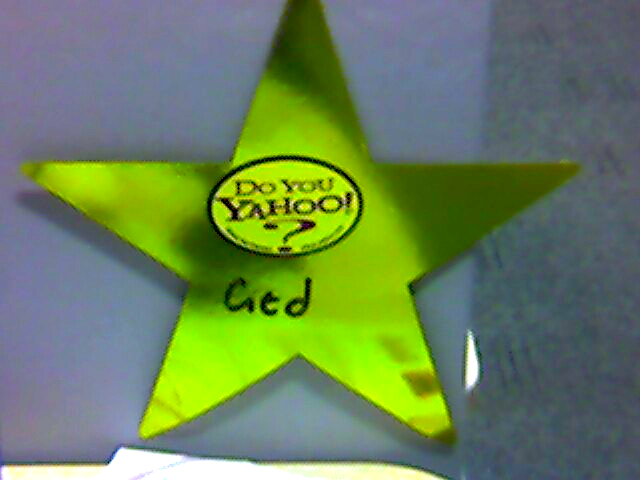 This is a big question. In the answers that it will receive you are likely to see:

Before we get into the why, lets think about the nature of businesses.

The AEI said that 88 per cent of the companies that made up the Fortune 500 in 1954 are gone. Yahoo! is between 21 and 22 years old depending which way you count its age.

Yahoo! has outlasted many of its peers:

Only MSN remains of the original brands that it competed against. If MSN wasn’t a Microsoft business, its survival would be questionable. Microsoft’s online services lost money from 2006 through 2010. By comparison, Yahoo! has kept making a profit – despite its issues.

The technology sector has become a hunting ground for active investors. Back in the 1980s, American publicly listed brands were attacked by investors:

Historic technology businesses have moved from being high growth to value businesses. This changed the nature of investors interest in them.

Google’s unique two-tier shareholding structure has proved to be an effective defence so far.

A business like Yahoo! looks like a classic corporate raid target as its value is less than the sum of its parts. It has a regular cashflow that could service a lot more debt at current interest rates. It has assets that can be quickly sold.

Capital has become much cheaper. This is partly a result of low interest rates set to keep the economy out of trouble in 2008. But there is also a lot of foreign capital and pension fund money looking for a home.

Given that we have the perfect vision of hindsight, Yahoo! missed key opportunities. Here are some of them.

While Yahoo! was playing catch-up with Google on search. Google outbid the online industry to pay $3.1 billion for DoubleClick. DoubleClick provided advertisers with more opportunities to place banner ads than Yahoo! did.

Yahoo! failed to sell to Microsoft

I don’t think that the Microsoft deal was a serious offer. There are  reasons to be suspicious:

Yahoo! didn’t communicate these risk factors to shareholders. Which then left the door open for the Microsoft-funded Carl Icahn coup later on.

Yahoo!’s board has failed the company

Yahoo! had its fortune hitched to brand display advertising. Growth has dropped in this for the past ten years. Yahoo!’s declining advertisng revenues started in Q2 of 2006. Part of the problem was that Yahoo! had been too successful to begin with. Yahoo! sold its display advertising for way more than it was worth.

Yahoo! failed to monetise search as well as Google. And then handed its search business over to Microsoft, who failed to do as good as job as Yahoo! managed on its own.

Yahoo! failed to execute in mobile, despite some smart early efforts. Photo community Flickr was the default photo app on Nokia’s N73 blockbuster smartphone. The N73 launched at the end of April 2006. It was was one of the last things I worked on before leaving. Given that headstart Flickr could have been Instagram. Instead its a more specialist community of ‘proper’ photography enthusiasts. Yahoo! Messenger and Mail both worked on Nokia handsets from the mid-2000s. Yahoo! Go was an app which provided access to services including:

It could have provided the same function that Android provides for Google, but Yahoo! considered as ‘beta software’ right up to it’s demise in January 2010. Yahoo! has been providing Apple with weather information and stock data for the iPhone. Yet it hasn’t managed to build a successful iPhone app.

One way of illustrating the decline of Yahoo! in mobile is to look at the user numbers of Yahoo! mail, which seems to have peaked around September 2011. 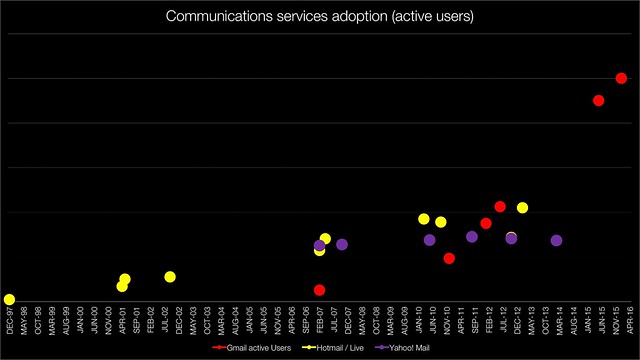 Hotmail shows a linear increase over time, likely due to organisation changes as it has moved to the cloud and Gmail takes off, presumably on the back of Android – though iOS users also have Gmail accounts.

Yahoo!’s acquisition process was broken. Ever since Yahoo! wasted 1 billion dollars buying Mark Cuban’s Broadcast.com the business slowed down. Broadcast.com was a scare on the collective memory. Capital decisions took longer, acqusitions took longer. The cheque book was harder to open. Under Marissa Mayer, it was finally let loose, but the purchases seem to have made little difference.

Yahoo! failed to become a media company. Back when I was at Yahoo! we launched Kevin Sites in the Hot Zone – a sort of proto Vice News in 2005. Despite Semel’s Hollywood background, he and following CEOs never made it work. Despite the fact Yahoo! had joint ventures with TV networks in Australia and Canada. When Marissa Mayer finally managed to get talent in the door, audiences had moved to other sites:

Yahoo’s downfall in social is spectacular. Yahoo! owned pioneer social brands, any of which could have been the Instagram, Facebook or WhatsApp:

Yahoo! products had a poor experience. I launched over 14 products at Yahoo! in just over a year. I only ever used 2 of them on a regular ongoing basis – Delicious and Flickr. Other products like Yahoo! 360, Yahoo! Answers or Yahoo! MyWeb 2 – fell into three categories:

Politics paid a part in this process. The Communications group (responsible for Messenger and Mail) had a lot of duplicate products. Yahoo! Photos was a bad version of Flickr. For storing your bookmarks there was:

This all bogs management down and sucks away resources. There were also so many projects that never saw the light, due to constant changes in priority. More Yahoo!-related posts here. What do you think brought about Yahoo’s downfall?