The estimated reading time for this post is 601 seconds

When reflecting on Google services, it made me realise how much the internet has changed. Back in 2005 when I started work at Yahoo!, the internet was a very different place.  It was an exciting time, web 2.0 was a technological and philosophical step-change for online services. We had cleared our palates of the bad taste left by the silliness of the dot com implosion.

Social networks weren’t mainstream in the way we would understand them now – though there were social networks prior to the the then nascent Facebook. Instant messaging was just starting to move on to mobile devices and were more a source of ‘presence’ information – whether someone was free or not than mobile messaging. Instant messaging on the desktop was big and everyone thought that Skype actually worked really well at the time.

We were conscious of security, but again Skype promised privacy and security (except in China) through secure encryption.  The 800LB gorilla in the room was Google. Yahoo! had managed to survive the dot com bust and subsequent 30+% drop in online advertising revenues because of the Yahoo! Dating business. Even in a recession people still need love. By comparison, Google had been on a tear, Adwords promised marketers greater transparency where they money had gone and what action had been derived from their advertising spend. There were even some nice charts that they could cut-and-paste directly into a PowerPoint presentation.

Google services impact was much bigger. Yahoo! had pioneered search with Jerry Yang and David Filo’s directory in the mid 1990s. You can still find an iteration of the directory at Yahoo! here. In 1999, the front page of Yahoo! still reflected that directory heritage, as you can see from this screen shot 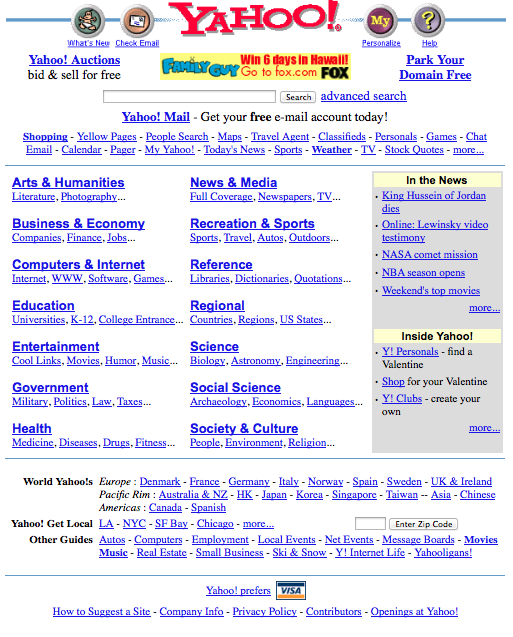 By the time I joined Yahoo! we had a search page that looked much more like the clean design of Google’s search page. The product was comparable in performance to Google as well, it just wasn’t Google; which is what most UK web users wanted. 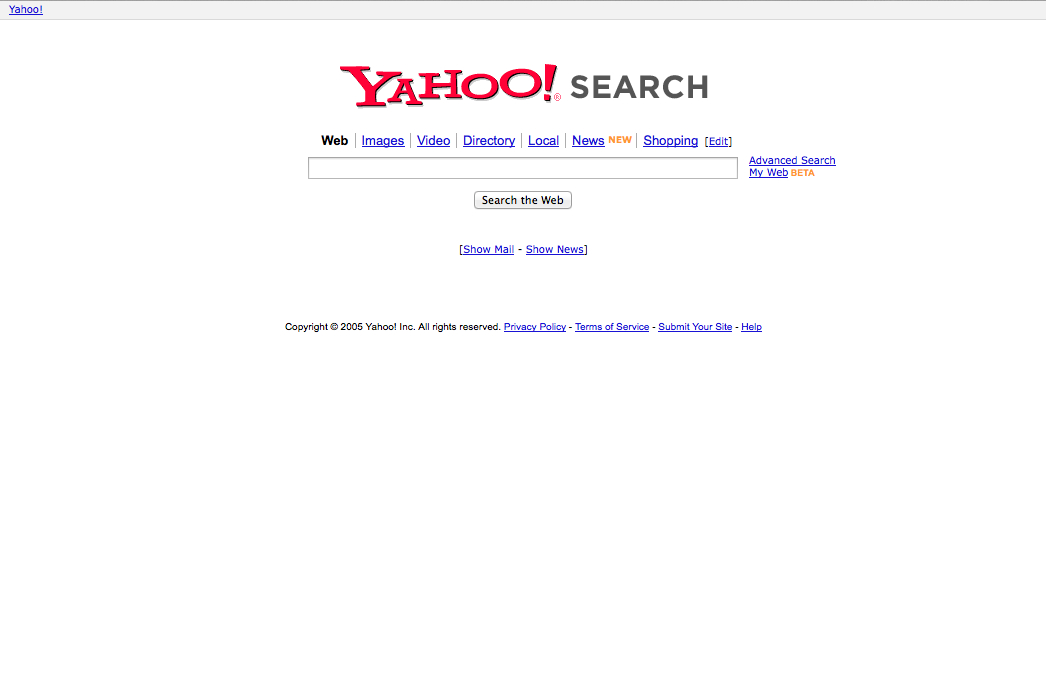 We struggled to get media mentions for Yahoo! in comparison Google services coverage wrote itself: Google spots Jesus in Peruvian sand dune | The Register. Products like Lycos’ IQ service didn’t get the attention they deserved because if it didn’t come from Google the digerati weren’t interested.  At the time Google had 70% or so of the share market, rumours I heard at the time from colleagues were that up to 95% of searches from Yahoo!’s UK office actually used Google – which foreshadowed Google’s European dominance.

Google’s dominance could be said to have peaked around 2006, social was starting to appear and consumers started to learn the downside of what beta meant as services started to disappear or become amalgamated into other products. Services that they wove into the fabric of their online life disappeared. Tools that helped them work became less useful as functionality was dialled back.

I have compiled a list of Google services that have been launched and closed. I ignored US-only products. There are some specific omissions:

A number of businesses that Google got involved with where acqu-hires:

The closure of Google Reader felt to me like a water shed moment. Google Reader had come along and eviserated the current marketplace for RSS readers, though the size and reach of the Google network. Names like Fastladder and Bloglines disappeared. Once the competition was demolished Google then withdrew of the sector and a scramble of cottage industry services sprung up to try and fill the gap; my personal favourite being Newsblur.

I suspect and have heard others suggest that Google has a problem getting users to use and commit to new services. I don’t think that Google Wave’s issue was consumer commitment, but poor product design, but the lack of adoption for say Google+ screams consumers and early adopters could be indicative of a wider wariness of the general public to invest their data and time in a new Google service. This maybe part of the reason why Google seems to be gradually extracting Google+ from its product matrix; just a few days ago no longer using Google+ author ranking in search.

If one looks at Google+ versus other services in Google Trends we can see a similar level of interest to say Google Reader, something that Google has already admitted was a non-viable product.

Google finds itself in a more normal internet brand marketing position: asking consumers for brand permission to innovate so that consumers will engage with their new products and services. Having been on the other side of that fence I realise what a challenge that can be. More Google related content here.

Google+
It’s Over: The Rise & Fall Of Google Authorship For Search Results | SearchEngineLand